A few weeks ago I adopted Bebe. Her original name was Sybelle but this did not come naturally to me. When I saw the ad I thought of Mimi but when I met her and began to speak to her Bebe (“Bee bee”) just came out. I looked it up later and learned that the name Bebe means “She who brings happiness.” So that worked out very well because that is exactly what she has done for me.

I was unsure about getting another cat, I don’t know where I am going with my life so I was thinking that having a cat may not be the best decision for me at this time… Despite the uncertainty, I did look on Kijiji for adult cats to be re-homed… then I started looking specifically at Persian cats since I both love that breed AND my apartment is a small one-bedroom and I felt an adult Persian would be the best match for this environment. A cat or kitten with a lot of energy would not enjoy this space.

I was starting to lean more on the “No” side and looking less… then I saw the ad for Bebe. I smiled instantly when I saw her. I responded to the Kijiji ad and went to sleep, still with doubts about having a cat. I dreamt of her that night, just as I had dreamt of this apartment when I had initially decided not to take it. It was the dream of having this apartment that made me go for it and now it was my dream of Bebe and me in this apartment that made me feel I was on the right path and that she was mine.

No one responded to the Kijiji ad but I saw that it was posted by a shelter so I found their Facebook page and messaged them. They said that another woman had already expressed interest in Bebe and that they were waiting to hear back from her. I waited a few weeks and in the end, the woman did not answer so they contacted me and made the arrangements to bring her to me. I was so excited and nervous that night as I waited for Bebe’s arrival. When she came out of the carrier I was delighted by her little self. She looked a bit bigger in the picture. She is actually a petite little lady. She explored a bit while the shelter lady was here and ended up hiding under my dresser. After the lady left I layed on the floor beside the dresser and spoke to her. After a couple of minutes, she came out with her tail up.

It is a bit less than a month later now that I have had her and I love her. She is 6 years old and is a friendly little lady. She loves being petted and brushed. She will sometimes wait in the bathroom while I shower. She follows me around and stares at me if she is not sitting or laying beside me. She sleeps with me every night and is usually right by my head! She also has her playful side which enjoys my homemade crumpled aluminum foil balls!

She is an Exotic aka the Short-hair Persian, a mix between Persian and American Shorthair. The shelter lady is supposed to come back at some point for a follow-up and for me to sign the contract. She will explain more of Bebe’s history to me then. All I know of her at this point is that she has been in several homes due to her leaky eyes. Her eyes, and sometimes nose, need to be cleaned multiple times a day due to her brachycephalic head/flat face.  Learning more about Persians and the Exotic specifically makes me even more of a fan! Such a sweet and loyal breed. Not many are up for adoption so I feel very lucky to have found her.

Welcome to my Blog!

Check out some of my work here: cross-stitch, drawings, & photography. 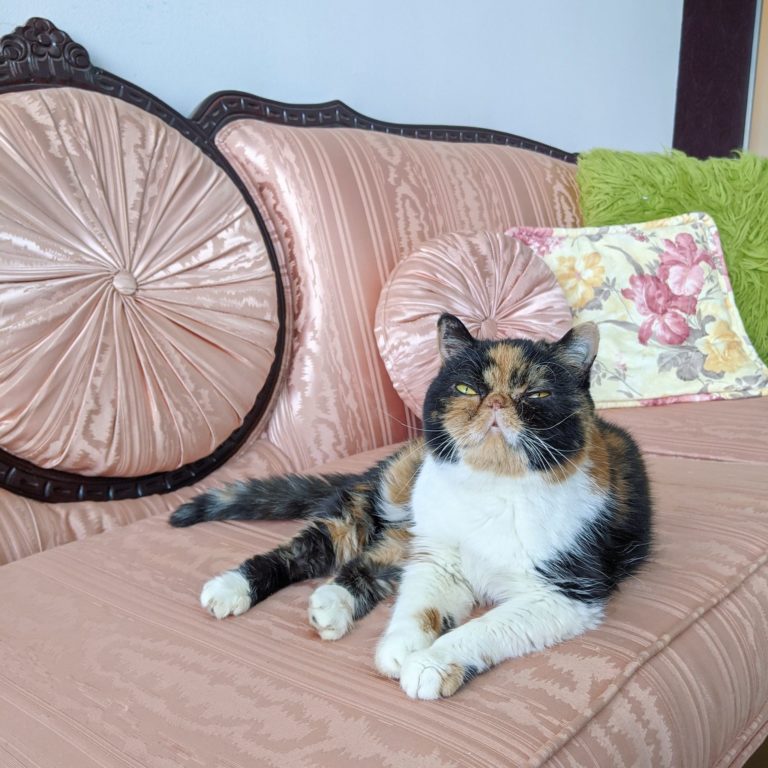 A few weeks ago I adopted Bebe. Her original name was Sybelle but this did not come naturally to me. When I saw the ad I thought of Mimi but when I met her and began to speak to her Bebe (“Bee bee”) just came out. I looked it up later and learned that the […]

We use cookies on our website to give you the most relevant experience by remembering your preferences and repeat visits. By clicking “Accept”, you consent to the use of ALL the cookies.
Do not sell my personal information.
Cookie SettingsAccept
Manage consent

This website uses cookies to improve your experience while you navigate through the website. Out of these, the cookies that are categorized as necessary are stored on your browser as they are essential for the working of basic functionalities of the website. We also use third-party cookies that help us analyze and understand how you use this website. These cookies will be stored in your browser only with your consent. You also have the option to opt-out of these cookies. But opting out of some of these cookies may affect your browsing experience.
Necessary Always Enabled
Necessary cookies are absolutely essential for the website to function properly. These cookies ensure basic functionalities and security features of the website, anonymously.
Functional
Functional cookies help to perform certain functionalities like sharing the content of the website on social media platforms, collect feedbacks, and other third-party features.
Performance
Performance cookies are used to understand and analyze the key performance indexes of the website which helps in delivering a better user experience for the visitors.
Analytics
Analytical cookies are used to understand how visitors interact with the website. These cookies help provide information on metrics the number of visitors, bounce rate, traffic source, etc.
Advertisement
Advertisement cookies are used to provide visitors with relevant ads and marketing campaigns. These cookies track visitors across websites and collect information to provide customized ads.
Others
Other uncategorized cookies are those that are being analyzed and have not been classified into a category as yet.
SAVE & ACCEPT